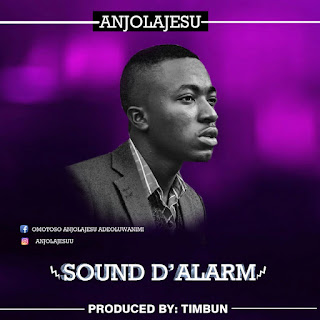 Young and dynamic minister, AnjolaJesu has released his second single "Sound D'alarm" after much anticipation.

Speaking about his recent single, AnjolaJesu said "Sound D'alarm is a call to arms, expressing God's heartbeat to every believer around the globe to contend for the faith, to take up their responsibilities as shining lights, having the blessed assurance of the victory we already have in Christ Jesus."

‎Omotoso AnjolaJesu AdeOluwanimi (fondly called Pastor Anjjy) is a staunch believer and a dynamic interdenominational minister of the gospel of Christ, via preaching and music.

Born and raised in a godly home of avid music lovers, he started to learn the keyboard from his father at age nine, and has always been a member of his church choir.

AnjolaJesu amazingly combines his ministerial responsibilities and academic activities as a Veterinary Medicine undergraduate of the University of Ibadan excellently well which has made him admired by many,especially students.

He has featured at The National youth convention of The Foursquare Church, Global students' congress of The National Fellowship of foursquare students both at Foursquare city,Ajebo camp. Ibadan Faith Seminar hosted by 'Femi Wilhelm, to mention but a few.

He has a debut single "IMMANUEL" to his credit and further seeks to continually impart lives by communicating God's heartbeat through songs.