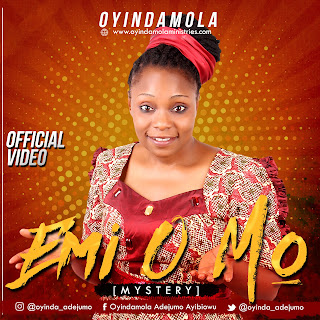 Oyindamola Adejumo Ayibiowu releases a brand new video titled 'Emi O Mo' (Mystery) to bless her fans allover the world. The beautiful video was shot in South Africa at Hartbeespoort dam, a location close to Pretoria and Johannesburg . The video was produced by Pepperest Pictures, a South African based film production outfit.

'Emi o mo' literally means 'I can't explain it'. The song talks about the many  mighty wonders of God that surround us yet which we can\'t explain how they work. How the stars are held firmly in the sky without falling, the unmovable foundations of the mountains,  the mysterious movements of the wind, the undepleted oceans and even the cock that crows on the dot of the hour. The virgin birth of Jesus Christ is the greatest mysterious wonder ever heard!

God is willing and able to solve all our many problems by the same mighty wonder power and we don't need to know how he is going to do it. The song end by saying \' those who believed yesterday received their miracles, earnestly believe today and receive your own miracle!