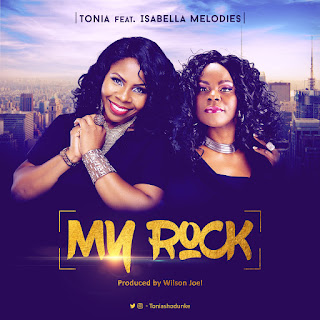 Still on the heels of the success of her recently released video for her hit praise single - 'Ijoya', Tonia Shodunke makes yet another applaudable appearance with a brand new single titled - 'My Rock'featuring her mentor and international Gospel music icon - Isabella.
'My Rock' can best be described as a 'timely offering' for every individual, an essential praise & worship tool, most especially in times like these with the recent happenings around the world.

The slow rock sing along is centred around the scripture that reveals - ''When men say there is a casting down, we shall always declare that there is a lifting up for us and all that pertains to us''.
Produced by the renowned music maestro - Wilson Joel, of Doxology Music. The music magnate himself.

Speaking on the single, Tonia shares:

''The focus of this single is having Jesus as our 'Rock of stability', an unshakeable refuge even in these trying times.

It's off my soon-to-be released album which will be dropping later this year, captioned "The Voice".