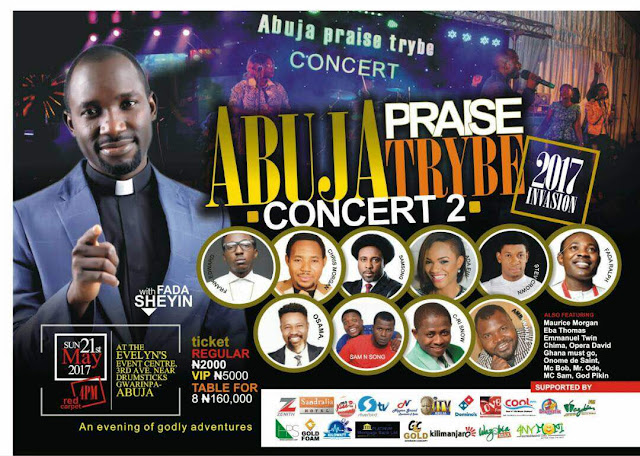 Fada Sheyin has risen to become one of Abuja’s finest Gospel artistes with smash hit releases and his annual Abuja Praise Trybe Concert.
The “It is Possible” singer is prepping for the 2nd edition of the Abuja Praise Trybe Concert and he envisages a bigger event with an unforgettable impact, as he enjoins other Gospel heavyweights while carrying the upcoming along.
Last year event saw the likes of Samsong, Steve Crown, Steve Willis and a host of others graced the stage alongside Fada Sheyin at the Evelyn’s Event Centre, Gwarinpa Abuja. He is bringing Frank Edwards and Ada Ehi to join the ‘Praise Trybe’ this year.
As part of the preparation towards the event, Fada Sheyin is giving away a whooping sum of N200, 000 + a chance to record a song and shoot a video to one lucky person this year. All you have to do is:
See links below (Untagged):
1. It is Possible (Feat. Samsong) + Yabo (Feat. Solomon Lange)
2. Jolly
3. Mighty God
The second edition of the Abuja Praise Trybe Concert holds on:
Date: 21st of May, 2017
Time: 4pm (Red Carpet)
Venue: Evelyn’s Event Centre, 3rd Avenue, Near Drumsticks, Gwarinpa, Abuja
Ticket: Regular N2,000 | VIP N5,000 | Table for 8 N160,000
Ministering:  Fada Sheyin, Frank Edwards, Ada Ehi, Chris Morgan, Samsong, Steve Crown, Father Ralph and more.
It is going to be an evening of godly adventures!
Watch Fada Sheyin announce the Instagram Contest with N200, 000 cash prize below:
Connect:
Twitter: @fadashey
Instagram: @fadasheyin
Facebook: Stephen Sheyin