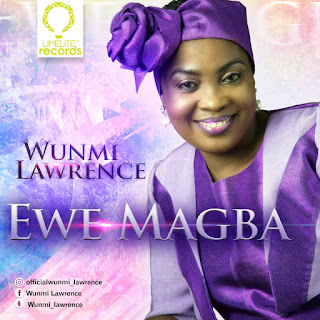 Wunmi Lawrence is a Gospel Artiste with mysterious insights to revelations for deliverance and with her debut single Ewe magba, she has been able to touch lives and open the eyes of Christians that everything the enemy uses against us was created for our own use. She also uses chants to pass this message for our own use.
Ewe Magba simply means sending back what enemy had done or sent against us, It could be  "BackToSender" or 'Back Fire"

in this part of the world people make use of everything GOD created against each other, you need to be quick and first to counter it with EWE-MAGBA, the bible says we should not be ignorant of the devices of the enemy but most people are still ignorant.

Ezekiel:21:21-. spoke about a Babylonian king who would always appear at a T-Junction to wreck havoc on the people of God if not that the Lord came to the rescue of these people whatever he sent against them would manifest, many are these kinds of evil the wicked men send on daily basis so how do we come out of it if not for eye opening message like Ewe Magba.

Rev:22:2 spoke about the tree that yield fruits for each of the month round the year and it says the leaves is meant for healing of nations - but a lot are using the same good as evil against others, there is a portion in the chant of Ewe Magba that is dealing with that.

2Kings.3:27 spoke about the wisdom an enemy could  have to make GOD  handicapped.. a part in the song EWEMAGBA is dealing with that just key into it and pray with it.

EWEMAGBA is all encompassing in deliverance: