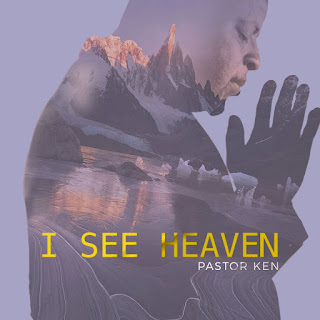 International gospel music minister Pastor Ken breaks into limelight with the release of his recent amazing worship/praise single titled "I See Heaven" produced in December 2016.
The song, inspired by the holy spirit is intended to reinstate the revival and restoration flow of the leventical music ministers' office in the body of Christ in this age and time, characterised by the erosion of true worship. In summary, the song "I See Heaven" was prophetically written.
Speaking about the song, the UK based gospel artist stressed that it is indeed the will of God that, God's children become so addicted to His kingdom pattern to aid better relationship between them.  He said;

"I believe and know that it is the will of God for His children here on earth to live their lives daily under the influence of heaven."
Early 2016, my family was going through some rough and difficult times. I remembered God's word which says "declare thou that ye may be justified'.  The statement "I see heaven in my home and family became  my daily declaration, before I knew it, things began to turn around for my good. I know without an iota of doubt that this song will bless you and turn situation's and circumstances around for your good, as it has done for me. For the scriptures says in Mark 13:47 " And what I say unto you, I say unto all."
Be blessed as you listen. Jesus is Lord!

Please to support this ministry, you can also purchase this song on the following platforms below.
iTunes: https://iTunes.es/DthPgb
Google Play: https://play.google.com/store/music/album?id=B3kaqy7ggyqhssjjbqc5lpxda2a
Amazon: https://www.amazon.co.uk/dp/B01NCKG89H/ref=cm_sw_r_wa_awdb_dDWqzb9YX1T83

As a teenager,  Kennedy Obazee grew up with love and passion for God in a local church known as Miracle Time Ministries which was in his childhood community in Benin City Nigeral where he found his place and gifting as a singer in the church.
As  Kennedy Obazee  grew in faith and in his music gift, he became a mamber of Church of God mission Okhoro Branch Benin City Nigeria, where he was then spotted by the late Archbishop Benson Idahosa for his unique, dynamic and spirit  filled way of singing.
In 1995, under the request of the late Archbishop Beson Idahosa, Kennedy Obazee was transferred to Faith Arena, Church of God Mission head quaters  in Benin City Nigeria to serve as a chorister  in the "Christian Redeemed Voices", and as a member member of the praise team.
With this new office came the responsibility and previlege to travel with late Archbishop Idahosa on mission trips. For his vibrant way of ministering, Kenney was nick named 'Lion of the tribe of Judah' by the late Arch Bishop Idahosa
In 2003, Kennext Obazee relocated to the UK, where he continued to serve God with his gift and got married to his beautiful wife Mrs Nathalie Obazee.  He was later ordained as a Pastor in Church of God Mission UK by Arch Bishop Margaret Benson Idahosa.
Credits:
Music track arranged by Pastor Ken Obazee and Minister Elvis E.
Music Produced by:  Edias productoin, Netherlands for Perecting Praise Foundation.
Mixed and mastered in the United States of America.
©2016 Perfecting Praise Foundation