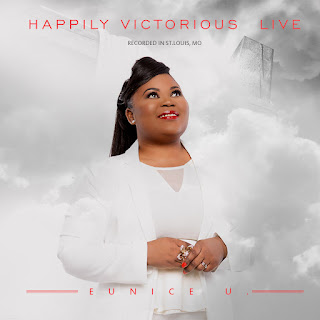 International Gospel Recording artist & Songwriter Eunice U. releases her debut album "Happily Victorious (Live)" , September  19th, 2017 world wide. Following the successful release of her debut single "Ogheneme (My God)" and its video which was released successively.
"I am beyond ecstatic and simply grateful to God for his faithfulness and this gift. In Awe of his love for us. It's truly a  privilege and honor to finally share these divinely inspired songs with the world. My earnest prayer is for these songs to be a blessing to every ear and heart that hears it. May worship burst fort, may praises bring down heaven, may joy be unquenchable, may healing be final, and may lives be transformed through each of these songs. This day and moment is a testimony in itself and I look forward to sharing my journey, this gift, and my heart with you all" - Eunice U.
Eunice U. Partners  up with Producer Rodrick Dowling (Earnest Purgh Music Director) of BDP Productions And  Sound Engineer Samson Ohda (JJ Harrison, Don Moen, Marvin Sapp, Ron Kenoly and more) of Ohda Media Inc on her debut album.
"Happily Victorious" was recorded live in St.Louis Missouri  at the Tabernacle of Worship last year. The album captures the heart, mind, and ear of the listener with songs varying in sounds, styles and inspiration. Eunice U. whose love for Jesus and music began at an early age pours out  her heart of worship about victory, Jesus and draws listeners to know who and whose they are because of Christ Finished work on Calvary.
All 16 songs were written by Eunice U. and produced by Rodrick Dowling. "Happily Victorious (Live)" will make you worship, dance and praise unending.
Eunice U is booking now and is beyond excited to bring "Happily Victorious (Live)" to  your city, church, community and your next event. She kicks off  her nationwide tour for the album in Maryland and Tennessee this November.
Get the album below:
iTunes: https://itunes.apple.com/us/album/great-is-your-name/id1277880556?i=1277880569
Spotify: https://open.spotify.com/album/0deGeSHRZQ8jqrKBHmeWxh?si=8tBWIUTC
Amazon: https://www.amazon.com/Happily-Victorious-Live-Eunice-U/dp/B0758XLW8M/
Watch Eunice U. speak on the album below:
https://vimeo.com/229296398
https://vimeo.com/229297006
Connect:
Instagram: EuniceU.music
Facebook | Youtube: Eunice U.
Twitter: EuniceUMusic
For Bookings Or More Information
Contact:
Ohda Records
Tel: (832) 231 06966
(314) 665 8549
Email Us: Bookeuniceu@gmail.com

Music Video: Sammie Okposo | Too Good To Be True @sammieokposo