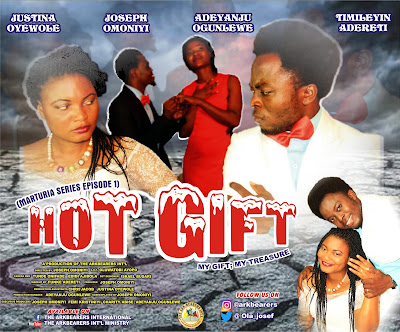 The Arkbearers Int'l Film Productions and The Arkbearers Drama ministry,  announce the release of the first episode of their new short film series titled, MARTURIA.
MARTURIA is a collection of true life based testimonies of several  men and women whose irreversible circumstances were transformed to wonderful stories and powerful prayer points for many...

MARTURIA,  is a Greek word, which means testimony. Below is the synopsis:
"When forces beyond man rise to take his beloved, his dream and vision, his career, his home or even his life... and everything around him is at the verge  of becoming a calamitous disaster... Some men at this point decide to turn to God, but what if God fails? What if there's something greater than God?"

The first episode, titled HOT GIFT, is a true life based story of a  newly wedded Christian couple Mr and Mrs Akintunde, whose hope to preserve the special ingredient in their marriage relationship becomes dashed right in the first week of their marriage. They become sudden enemies to the uttermost surprise of their closest friend, who so much cherished their relationship before the wedding...

HOT GIFT is a story every couple and most especially, intending couple should see.