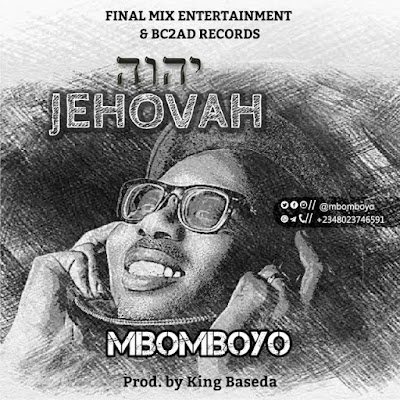 The Official Leak of The #LeakedSong #JEHOVAH

Mbomboyo kicks off his #20yearsJammin4JAh celebrations with this classic remake and remix of Lt. Stitchie's 2010 release titled "JEHOVAH"

The song is excellently produced by the prolific, remarkable and dynamic King Baseda of FINAL MIX ENTERTAINMENT.

Be blessed and please do experience "JEHOVAH" the secret behind #TheStoryOfMbomboyo

Since 1996, Mbomboyo has been a consistent voice in the Gospel Reggae/Dancehall genre, impacting thousands face to face with his unique musical style and message.

As an Artiste, who started in church with accapella music before locating his "calling" in the reggae/ragga genre. He has performed in
countless churches,concerts, gigs, house parties and street jams. He was lead singer in the group-OASIS which made some impact in the late 90's. Also part of de duet-BOMSKHOBA. Went solo from 2004 till date.

As a Producer, Studio Owner and CEO, he has recorded and produced hundreds of artistes from his D512PRO STUDIO based in Abak, Nigeria.
He has produced the likes of 2012 and 2013 MOBO Award-Nominee,
Scotland based El-Mafrex and 2012 SVMA nominee and kid sensation Mya-K
amongst others.

His music style which is basically reggae/ragga influenced with a likkle touch of hiphop, dancehall and reggaeton is spiced with african
rhythm and is a culmination of years of research, collaborations and networking.

The result is a radical but highly definative sound laced with positive faith-based lyrics.

He released RECAP in 2010 which was a successful album with outstanding tracks "Long time ago" and "Echid Aneke Andad" which enjoyed massive airplay nationwide.

In 2012 he came out with RECAP RELOADED, currently being promoted across platforms. His videos of "Long Time Ago" and "Am Blest" has
also been greatly viewed and enjoyed worldwide.

Mbomboyo was born Aniekan Okokon, is married and blessed with children, he has a Bachelors degree in Zoology and is actively involved as a leader in his local church. His exemplary christian testimony has been a source of motivation &amp; inspiration to many
youths. Jammin'4JAH remains his pure and focused passion.