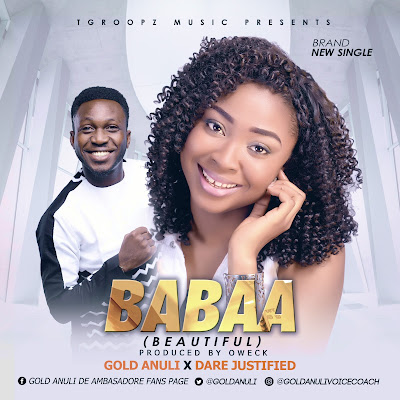 3years back since she released her last single KULIENU, singer, songwriter, music producer, pianist and voice coach Gold Anuli is back with a new single BABAA.

Talking about the song, she wrote.

"Babaa is a comeback song for me 3years after KULIENU, and it honestly is not my creation. Though I'm a songwriter but I would not take the credit for writing this song. By this I mean that I simply woke one morning hearing the verses. Clearly sung music with lyrics and all. I simply recorded what I heard into a phone with my sleep ridden voice. The chorus is a popular praise song and I didn't conjure up that combination either. It so happened that I was highly overjoyed that morning as I listened to the rough recording on the phone, and as I sang the verses continously, the chorus showed up like a medley. I caught onto that as well and voila. The only creatively written parts of this song are the coda "you are worthy of praise" and the bridge (Dare's part) both of which I believe were equally inspired otherwise it wouldn't sound so good.

About Dare, He's a really anointed minister, I was already thinking of featuring him, when a close friend whom I'd never told anything about it suggested to do same, so I thought, this is it.

It's an honor to  be a channel to bring this lovely tune and many more to the ears of many. To God be the glory always."

Too marvelous and great for words

Too wonderful for comprehension

Who can grasp your infinite wisdom

Who can fathom the depth of your love

Babaa I praise your name you're worthy

You are powerful beyond correction

Too marvelous and great for words

Too wonderful for comprehension

Who can grasp your infinite wisdom

Who can fathom the depth of your love

Wetin I go give you if no be my praise

Uncountable burnt offerings no fit do you papa

So I humbly bring to you my praise and offering

Make you take am with all your heart oo

You reign you rule in the affairs of men

Angels bow before your throne

Nobody go fit match you

You reign you rule in the affairs of men

Angels bow before your throne

GOLD ANULI - (Gold de ambasadore) is a singer/songwriter brand turned music producer who performs either accompanying herself with the piano or -in a solo, duo, trio, 4 or 5-piece band.

She is also a Record/music producer currently nursing a music label of her own styled Tgroopz Music , a registered music company in Nigeria.

Full names Gold Anuli Nwangwu, she grew up and had most of her formal education in - Owerri, Imo state.Her zeal for singing and live music initially began as a hobby and later began to define as the work of a lifetime; a lifelong career and ministry.

Starting 1999 in Owerri, she began live singing on various platforms, and embraced music professionally from 2007 as a solo recording artiste. During this period she joined and led various singing groups. By 2008, she relocated to Lagos to develop her career further and made a debut album effort “MY CHARIOT” self released in the same year. She would then embark on various musical trainings to improve her craft after that.

Gold Anuli took a first degree in Estate management at Imo state university which was replete with both academic and musical success and milestones, in 2010 she went through the four levels of competition in the Black Entertainment Television (BET) organized singing talent hunt programme, the Nigeria edition of the “SUNDAY BEST” competition held in Eko Hotel and Suites Lagos Nigeria and emerged as one of the seven (7) winners out of a whooping 1000 talented singers officiated by talented Judges, Kirk Franklin, Donnie Mclurkin and Kim Burrell and Muyiwa.
Several years after that, Gold has spent most of her time improving her piano and music production skills. Her current single "Kulienu " off the  sophomore full-length CD A CHANCE released in 2014 was also  self produced and is widely celebrated.
Over the years, Music Production/ Direction, Voice training, Sound Engineering and playing live piano have become her added repertoire skills .

CONTRIBUTIONS: She is currently convening music concerts and live recordings with other artists also and performs / tours with her music team.

PASSION: Gold loves to worship God with her gift of songs and make people happy with her music.  She has a passion to assist young and aspiring music talents and strongly believes that as an icon in the music industry, she is there  to inspire as many as would encounter her works, life and message.

"I am extra mindful of the thin line between the business of music and the spiritual part of it., God’s ultimate guidance and a purpose driven life is key to true success in every endeavour” she says.

She presents her live singing in a variety of formats - solo, duo, trio, 4 or 5-piece band.

She currently lives in Lagos, Nigeria.

She has two self-released, full-length albums. * My chariot, * A chance

Her favorite values are – Honesty, Integrity, simplicity, friendship and ease.

Her Inspiration: The bible