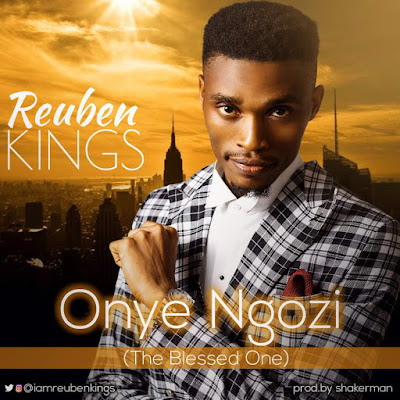 Gospel Music Minister- Artist, song writer & Rapper Reuben Igwe aka Reuben Kings is thrilled to announce the release of his debut single titled ‘’Onye Ngozi’’which means ‘’The Blessed One’’.
Onye Ngozi is a contemporary Highlife praise which is delivered in Igbo dialect and English language produced by #Shakerman.
The song testifies of God’s Goodness and Faithfulness in the time of recession like the story of Isaac in the Bible. In obedience and willingness to the word of God in tithing, partnership, seed offerings and giving we experience the miraculous that nations affirmed that we are indeed‘’The Blessed ones’’.
Reuben Kings is a great praise and worship activist who is committed in delivering that which pleases God. His participation in propagating the gospel got him and friends exalted on the cover page of the November 2017 edition of the #1 daily devotional ‘’Rhapsody of Realities’’.
He is currently working on releasing couple of videos and songs which include: #Mgborogwu, #ANewLift, Loud & Clear….
It’s #ReubenKings,  Abatagom!!!