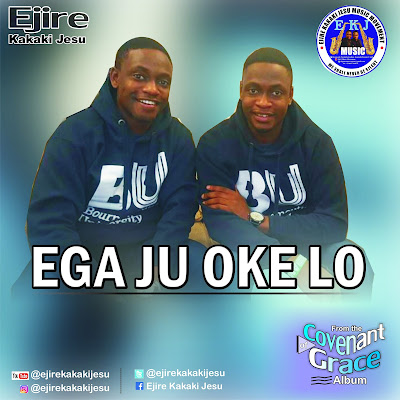 From the Album "Covenant of Grace" - Ega ju oke lo which means YOU are greater than all describes the greatness of JEHOVAH and HIS superiority over all.

This is a song borne out of the inspiration of the Holy-Spirit and was fully delivered from heaven in few minutes into the hearts of the ministers to bless this generation immensely.

The LORD has placed the paddle of the Movement into the hands of HIS chosen vessels Ayansola Joshua and Ayansola Caleb, twin-brothers from Modakeke, Osun-State, Nigeria.
Joshua and Caleb had their first degree in Physical and Health Education (First Class Honors, 2014), at Obafemi Awolowo University, Nigeria, where they both had landmark achievements in Sports as they won numerous medals for the University while Playing Badminton, Field Hockey, Football and Squash. They were by the special Grace of GOD awarded the prestigious Commonwealth Scholarship for their Masters Program in the United Kingdom.
Joshua completed M.sc in Psychology of Sport (BPS Accredited) in the University of Stirling, Scotland while Caleb completed Masters in Public Health in Bournemouth University, England yet again outstandingly before GOD redirected their steps.
The duration of the Masters program was a defining moment of special spiritual encounters for the twin brothers, as GOD spoke in clearer terms regarding their ministry, confirming the messages that have been delivered in stammering lips before then.
The brothers struggled to focus on their academic duties as the Holy-Spirit of GOD continued to load them with heavenly composed songs, delivering them into their hearts from time to time in order to show it to the world (Job 32:8).
Upon the completion of their Masters program, the brothers had to resist the pressure to immediately commence a PhD programme in the United Kingdom in order to positively respond to the call of GOD upon their lives.
The twin-brothers have spent most of their time and efforts serving GOD, since they decided to give the whole of their lives to JESUS in 2009 (though they were born into Christian home), and they have been privileged to serve in the body of CHRIST in different capacities. The LORD has proven HIS faithfulness unto HIS covenant in the book of Job ch 36 vs 11 in the lives of Joshua and Caleb.
Joshua and Caleb who plays multiple musical instruments including the drums, guitar,keyboard and the saxophone carries an unusual passion for GOD and HIS work. They are surrounded by a team of GOD-driven and versatile instrumentalists.
The call into ministry have indeed been a glorious one, the CALLER has made them lack nothing in carrying out HIS ordained assignment.