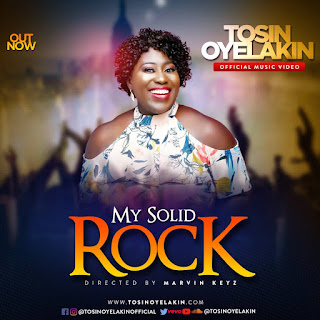 Straight off the back of the official release of her 'My Offering My Everything' Album just earlier this month, Minister Tosin Oyelakin releases this amazing new music video and single titled 'My Solid Rock' off the same album.

Tosin keeps going from strength to strength in her pursuit of spreading the love of Christ through her music and this music video just affirms that fact. The song is a medley of an old hymn, Christ the Solid Rock and some of Tosin’s own indisputable creative songwriting inspired by the Holy Spirit.

The shoot of the video directed by Marvin Keyz Films is full of testimonies as the Lord delivered the cast, crew, supporters and Tosin herself from a clash between area boys and the police which happened right at the location
of the video shoot. With gunshots and knife blades being wielded just as the shoot commenced, the enemy tried to stop this work, but Yahweh is a mighty deliverer who ensured that the video was completed safely on the day.

In her own words, Tosin says of the video;

“I believe the Lord will do amazing things in the lives of His peoplethrough this video and that is why the enemy tried to stop it. Christ has always been My Solid Rock, and He proved Himself yet again through the success of the video shoot. When you lean on Him completely, He always remains faithful to His promises!”

My Solid Rock audio was produced by Manuz Akpanke of KoinedRecords.