Lyrics Videos: Bolaafola | What A Mighty God + Never Give Up ||@Bolaafola 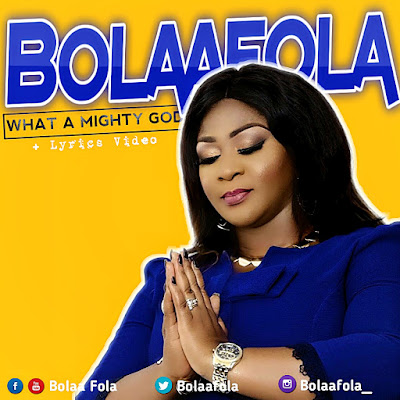 UK based Nigerian Gospel singer Bolaafola releases two new singles – “What a Mighty God” & “Never Give Up” – from the album “You Make My World Go Round”, produced by maestro Wole Oni.
“What a Mighty God” is a reference to the supremacy of God who goes beyond the natural phenomenon to effect is will in our lives and we translate it as wonderful. The choral patterned single expresses Bolaafola’s worship to God and she does not mince words in doing so.
“Never Give Up” is an Urban inspiration which echoes the thoughts of Apostle Paul in the book of Romans – what can separate us from the love of God?” Bolaafola’s faith is defiant as she lyrically expresses her stance that comes what may, she will not give up on the love of God.

Bolaafola released the videos for the single “Oluwa J’Oba” and “Abba Father” with a cameo appearance by Wole Oni, from the album, last year. She has ministered songs from the album at various gatherings in the UK.
Watch “What a Mighty God” Lyrics Video below:
Watch “Never Give Up” lyrics video below:
Get the singles from Bolaafola.com:
http://bolaafola.com/
Connect:
Twitter: @bolaafola
Instagram: @bolaafola_
Facebook: Bolaa Fola
URL: www.bolaafola.com