Music : Unto Us A Child Is Born – Olufunke Ft Kiki | @olufunkeechefu 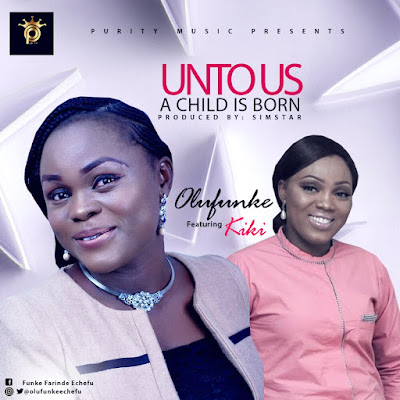 Olufunke premiers new single titled unto us a child is born to celebrate the birth of our Lord Jesus Christ this Christmas season.
The inspiring Gospel music recording artiste had in time past released great and awesome tracks such as Overflowing praise if you know me before, and Iba which was her latest single preceding this new single.
Unto us a child is born takes us way back into the history of Israel’s captivity and how God sent Moses to their deliverance and it also reminds us that Jesus Christ is the reason for the season.

This song reminds us of the story of how Adam’s sin brought mankind under the captivity of sin and death and once again, God sent a deliverer in the form of a son….HIS ONLY BEGOTTEN SON JESUS CHRIST.

OLUFUNKE in this song features her best friend and vocal coach, known simply as KIKI…a vocal powerhouse.
DOWNLOAD
LYRICS
A long time many years ago
God told His good friend Abraham that Israel will enslaved in a land far away
Abraham didn’t understand but he never questioned God
Until the appointed time and the Word of God came to pass.


And Israel wept
We need a deliverer
Where’s THIS SAME God our fathers have always talked about?
And God said
I’ll send you a deliverer
And unto them a son Moses was born


Chorus
Unto us a child is born
Unto us a son is given
And the government shall be upon His shoulders
And His name shall be called
Wonderful Counselor The Mighty God.


About Olufunke
OLUFUNKE started out quite early in life with her music ministry from her teenage years where she was very active in the teen choir. She later joined the main church choir in one of the Rccg parishes in Lagos where she distinguished herself as a worship leader. In 2010, she officially launched a music group known then as the MUSIC ‘N’ LIFE BAND which got several invitations to minister in several programs and events within Lagos.
She attended Vetland Grammar School Oko Oba Agege before proceeding to the Polytechnic Ibadan where she bagged a degree in Mass Communication. She is a trained broadcaster and media executive having attended several trainings in this regard and has worked in several places in various capacities.
She is married to a pastor and her music instructor Chinedum Echefu fondly called PASTOR CJ by friends and followers and they are blessed with a beautiful daughter.