Music: Intoxicate Me By Boluwatife David 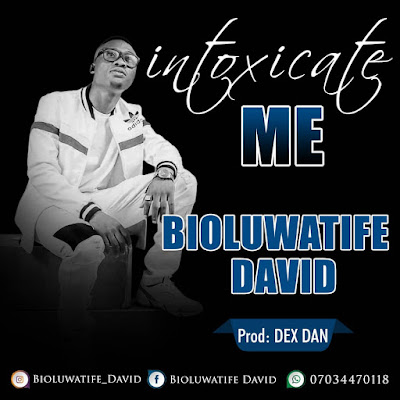 Boluwatife, as fondly called by his fans, has yet released a new powerful and spirit-filled song titled Intoxicate Me, after the premiere of his last evergreen prayer song to celebrate new year titled Wasetemi.

"If you have the holy ghost in you, you've become a supernatural being entirely, you have the approval to decree a thing and it shall be established unto you Intoxication of the spirit (INTOXICATE ME ) is an inspirational song set aside for weak, depressed and forgotten souls to be revived again. its a powerful awaited and most anticipated food of the spirit set aside To destroy spiritual fire extinguishers for vessels that are ready to burn for the gospel of Christ Jesus..." Boluwatife

Bioluwatife David is fast-rising worship, leader, a spirit-filled singer who has set himself aside to lead the covenant people to the throne of GOD through his divine and inspirational worship and also to lead them to break the gate of hell through his divine and heavenly inspired music. He released his first inspirational and spirit-filled single titled WASETEMI in 2017 alongside with Abba father and Have your way in 2018 and these have brought his face more to many souls in the club of the covenant people and there are lots of testimonies.