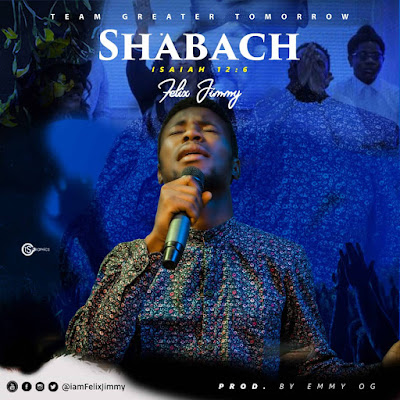 Felix Jimmy is a Gospel music minister coming with a level of depth in God, he believes in the delivery power of worship, from every kind of oppression and also believes that every genuine worship should lead the lost back to God’s unfailing love.

Felix Jimmy describes this song saying “On the 26th of December 2016, I was alone in my closet, studying the book of Isaiah, and God took me to Isaiah 12:6 and I entered into an intense prayer, all of a sudden this song burst out of my mouth,”Shabach Shabach, hallowed be the name of Yahweh” when I stopped to check the meaning of the word “Shabach” I discovered it means a shout of joy, a language to shout out God’s faithfulness when English fails to describe”.

The song was first ministered by him on the 1st of January 2017 in a church concert and since then, the song has gone viral blessing lives to the glory of the Lord. So many have made this song choruses in their local churches, so many singing the song without knowing the writer of the song.

"Whenever I sing this song, there is an unusual presence I enjoy, most especially when in prayers. This song has greatly blessed me and thousands of people that have heard it, I believe it will definitely bless you and take you to another realm when you listen to it". he said.