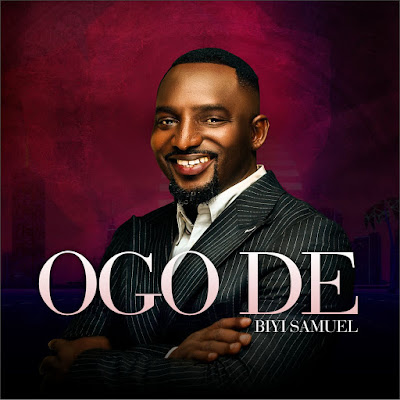 The new studio album titled “OGO DE” by music minister Biyi Samuel is out. The new album is available online and at local stores!

Over the years, Biyi Samuel has proved himself to be an outstanding singer, songwriter and music personality with his unique music style and powerful vocal delivery. From the days of 'IGI ARUWE', his first viral song, the Ogun state born singer has released different soul-lifting songs of different genre. His special vocal and pitch delivery makes his voice his unique identification symbol. Biyi has featured on several songs, and each time he brings 'Life' into the content.

Having released several albums that we can always connect to, Biyi Samuel is presenting to us another fresh album with a household title, and he calls this 'OGO DE'.

The new album is available on Boomplay, Amazon, iTunes, Spotify and all Digital music stores.

"It's been a journey really. A journey with many doubts and fears, sometimes not knowing what might happen at the next juncture of life. A career with so much depth and Uniqueness. But then laden with so many troubles, envy, hate and love.I have heard many say that 'He only has a good voice, He is only unique'. Some even said 'He is truly legendary, but he's not a commercial success'. One of my colleagues in the industry once said to me that she will be going into my archive to dig out songs that I never explored, I laughed but then I wept. It was mixed feelings for me. And I eventually asked the Giver of my talent when is it going to be??? When is it going to happen???
As I was really tired of smiling and suffering. Then dramatically OGO DE walked in quietly, and on the inside of me, I felt a new me has arrived. The atmosphere began to change gradually. And I couldn't but began to blend in with my newness. It was a different atmosphere in the real sense of it. It wasn't the caricature of a new beginning, It was so clear. Despite my shortcomings and imperfections before my Creator, I began to feel I'm the next in line for a global announcement.
OGO DE!!! Psalm 3 settled my case."