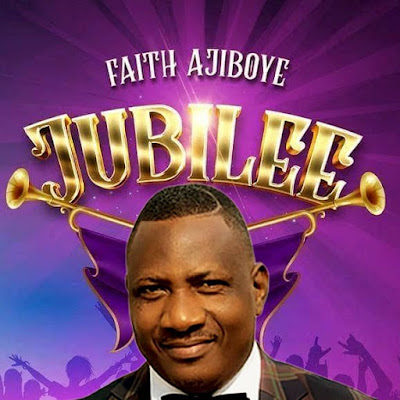 Coming off the Gratitude Concert held a few weeks ago to mark his 50th birthday, a groundbreaking event that featured generals and legends in the Nigerian Christian community and Gospel Music Ministry; international music director and author Faith Ajiboye follows up with the release of a masterpiece album titled JUBILEE.
JUBILEE -  THE ALBUM
Jubilee album is a collection of songs I received from the Lord for my personal time of devotion and prayers. Some of these songs were given to me in the dream and have transformed my life and ministry forever.
From 'We Shout' which was recorded in 2011 to the last song, 'Sovereign Lord', recorded initially in 2008 but remixed in 2019, you are on a flight that will steadily but surely take you to God's presence where nothing else matters but to see Him and love Him.
The anointing and presence of God we felt in the studio at the time of recording each track is definitely a treasure that can never be forgotten.
God is about to sound the trumpet of Jubilee in your life as you tarry long in His sight with these anointed songs. Get ready to soar on eagle's wings and be mightily blessed and transformed.
It's JUBILEE!!!
Where To Get Jubilee Album Online:
Spotify: https://open.spotify.com/album/5VaopGMrnQtGripDs9fu0D
iTunes: https://itunes.apple.com/ng/album/jubilee/1459098601?app=music&ign-mpt=uo%3D4
Apple Music: https://itunes.apple.com/ng/album/jubilee/1459098601?app=itunes&ign-mpt=uo%3D4
Deezer: https://www.deezer.com/us/album/92914792
Amazon: https://www.amazon.com/Jubilee-Faith-Ajiboye/dp/B07QDNFYQC
Amazon Music: https://music.amazon.com/albums/B07QDNFYQC
Tidal:  https://tidal.com/browse/album/107303844
Boomplay: https://www.boomplaymusic.com/webitem/musics?cid=2713348