Video: Aity Dennis – You Are The Greatest ft Eben [@AityDennis] 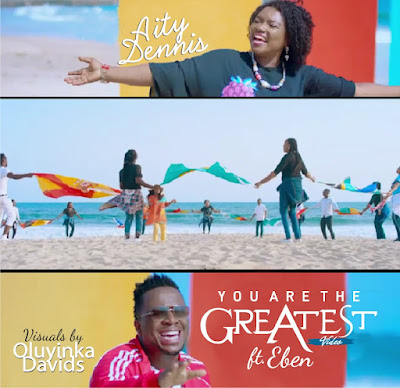 As a sequel to the audio of “You Are The Greatest” featuring LIMA Award-winning artist Eben, Veteran gospel music minister Aity Dennis has released the official video of the song.
The video as curated by Oluyinka Davids was almost entirely shot in a beach and featured both day time and night time scenes with lots of happy people eulogizing the Almighty God. The blend of colourful backdrops and the expanse of the sea made for a picturesque sight.
With over 3000 songs and 10 CDs, multiple award-winning Gospel music minister, Aity Dennis, crisscrosses the nations of the world with her inspiring message of joy and faith in Christ. Her music will move your heart and feet and bring healing, comfort and restoration from the Throne Room.
A former school teacher and Television producer, with a Masters Degree in Mass Communications and a First Degree in French, Aity Dennis has been in the music ministry for over twenty years and has shared the stage with several renowned international acts. She sings in many languages including English and French.
Aity Dennis, CEO of Aity Music Foundation and Chairman, Lagos State chapter of Fellowship of Gospel Music Ministers of Nigeria (FOGMMON), is married to Dr Dennis Inyang, Presiding Pastor of Sure Word Assembly, Lagos, Nigeria and they reside with their family in Lagos, Nigeria & Portland, Oregon, USA.