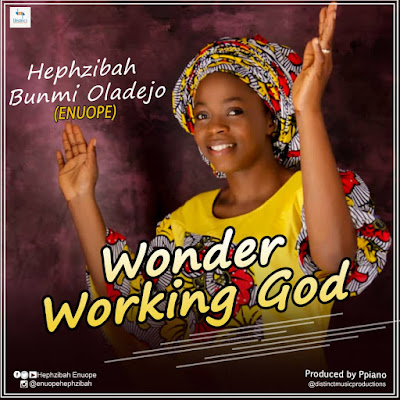 "The song came through the inspiration of the Holy Spirit during her quiet time with her Maker while reading God's word. Job 37:5 says God thundereth marvellously with His voice, great things doeth he, which we cannot comprehend. That portion of the Bible was captured and breath on by the Holy Spirit together with other portion of the Bible. Wonder Working God* is about God's Sovereignty, His Supremacy, Awesomeness and Unsearchable powers. This track is set to bless the Entire Universe as we lift our hands in worship to YAHWEH" Hephzibah

Hephzibah Oluwabunmi Oladejo was born into the Family of Pastor and Prophetess Lawrence Adedayo Alabi. She was born in Stuttgart in Germany, She is the first daughter out of the four children in the family. She hails from Ikere Ekiti, Nigeria. She obtained her West African Examination Certificate (WAEC) at Anglican Girls Grammar School (A. G. G. S) Ijebu-ode in 2003.

Thereafter, she proceeded to Tai-Solarin University of Education, Ijagun, Ogun State where she studied Social Studies and graduated with a second class Upper honour in the year 2011.

Hephzibah Oluwabunmi Oladejo popularly known as Hephzibah Enuope' joined the church choir at a very tender age. She renders special Anthem wherever opportune most especially whenever she follows her beloved Mother (Who happened to be a Gospel Music Minister). Hephzibah Enuope is happily married to Evangelist Olamilekan Oladejo and has a great son, She has Two Musical Albums to her credit.the first album titled “Your Majesty” was officially Launched in 2014, while the second album titled Enu-Ope which birthed the name 'Hephzibah Enuope' was officially launched on her Wedding Day in 2015. The German-born Gospel Artiste is set to release a New Single Track titled Wonder Working God from her forthcoming album.