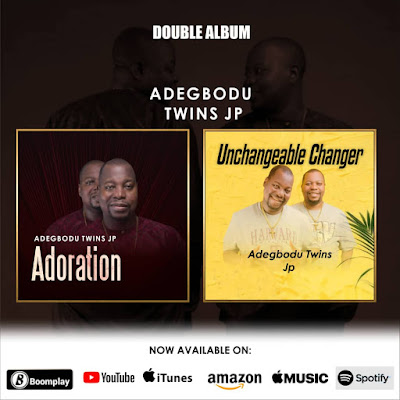 The albums titled 'Adoration' and 'Unchangeable Changer' was launched in October 2019 under the management of Obanich Records, and is now available online on all digital stores worldwide and offline across Nigeria.

Adoration is a 13-track album that features several top gospel music stars such as Yinka Ayefele, Bidemi Olaoba, and Femi Solar amongst others.

Unchangeable Changer is a 5-track album that represents the original Adegbodu-Twins style of gospel music.

Taiwo and Kehinde Adegbodu also back the double-album up with the release of a video of one of the tracks on the 'Adoration' album, titled 'Ko sohun to le' (a song of encouragement and saying no to depression).

Watch the video of 'Ko sohun to le' below: