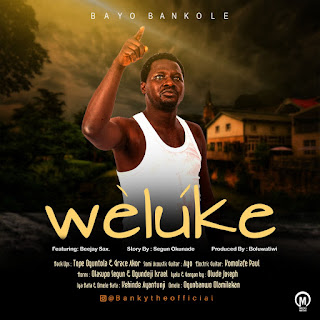 Bankole is a passionate gospel minister of repute, who has distinguished himself with his unique approach to contemporary music.

The Lagos born musicologist is driven with an uncommon passion to touch lives and destinies of worshipers with soul-lifting songs and appealing vocal ability to draw the hearts of men to God.

He believes music found him from his childhood and his love for the profession he has immersed himself in the past two decades, has yielded rewarding results as it has taken him to several West African countries, South Africa, EAU, and many states in Nigeria. This exposure has no doubt compelled him to learn some songs from many African countries he has visited.

Bankole, who is the convener of the bi-monthly gospel musical programme, In His Presence, has an album titled Yahweh to his credit. The album has four tracks and features Beejay Sax and Kunle Oluleye, popularly known as Jesus Pikin.

In His Presence has hosted several popular Nigerian gospel artistes like Gbenga Oke, Bukola Bekes, Odunayo Aboderin, Femi Okunuga and some other gospel ministers and still looking forward to bringing together other artistes like Beejay Sax, RCCG Praise Team and others.

He’s a man filled with the humility and love for the word of God. His newly found passion and a new phase of ministry, IN HIS PRESENCE, attracts over 150 worshipers every other month.

Bayo Bankole’s new project (WELUKE) depicting the ordeals of the ordinary citizens in Nigeria and many other developing countries across the world. It highlights the pains hapless citizens in such societies endure in their daily lives and the triumphs their resilience and trust in God can ultimately earn them.