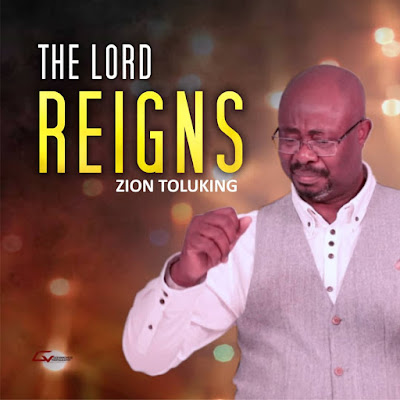 Following the ongoing pandemic of COVID-19 which has hit the globe and causing panic in humans, the music evangelist brings a word of hope to nations with the proof that only 'The Lord Reigns'.

Toluking shared on his Facebook page God's message to him about the epidemic:

"As I set myself in prayer last night about this epidemic virus, I just prayed for about two minutes a prayer of forgiveness then I received the message without my spirit (John 3,14-15)

14. And as Moses lifted up the serpent in the wilderness, even so must the Son of man be lifted up:
15. That whosoever believeth in him should not perish, but have eternal life.

This must happen because all the revelation in the Bible must come to pass and more so there are sins everywhere, this generation has forsaken and don't fear God.
Do you want to be safe? Look unto Jesus Christ...so you and your household can be saved.
This is just the beginning of the end time."

Zion-Toluking was born and raised in Nigeria, he started his music career at age twelve by joining a gospel band, and was also a member of his church choir. Because of his special gifts in playing music, he played with few bands and later formed a band called CDS - Christ Disciples Singer in 1994.

He trained as a sound engineer and music producer, really happy and enjoyed playing music, He relocated to Ireland playing music in many places, and won Best Male African Gospel Artist in 2011.
He official formed a gospel music band in Ireland in the year 2000, the aim of this band is to propagate the Gospel of our LORD JESUS all over the world and to reach out to lost souls. Zion Toluking also plays in concert, church ministration, and live band in Christian parties.