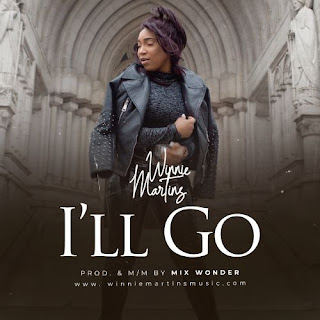 The singer seems to be launching a new phase in her solo career with the smooth mid-tempo single “I’LL GO” which is hinted to be one of the tracks off her soon to be released debut album.

“This song is my personal journey with God. It reiterates the importance of intimacy with God and how, as Christians, we must endeavor to hear from God. For me, this song is an anthem of total surrender to God’s wills, His leading and guidance”. -Winnie Martins on her inspiration behind the song.

The new single is coming about seven months after she released the hit single “Take Over” which has received massive airplay and was produced by Roxnation’s producer, SMJ.

Winnie Martins describes the new single as a part of a puzzle that will fit together in her coming album. And once again, she's seen crafting her art and bringing her afro-pop flavor to life in this song produced by mix wonder magic and Limoblaze.

Winnie‘s new song may be simple and repetitive but, with lyrics like “Send me/anywhere you send me Lord I’llgo, I'll Go/I don’t want to do my willOhGod/God I wanna do your will oh God”, it's definitely catchy and will easily stick.

It is no surprise that this sound is slightly different from what we heard in the last single, the singer has continued to flex her ability to be genre-fluid in her music. And this track is just another proof that she pulls it off nicely.

It looks like we are in for a whole ride as the single is also set to release the music video for this single on January 4thin the New Year. “I’LL GO” is ALSO now available on all major streaming platforms.