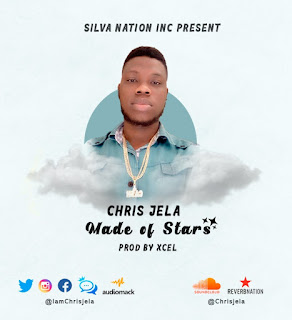 Fast-rising Gospel music minister, superstar, and LoveWorld very own, Chris Jela comes back with this unique up-tempo gospel tune, titled ‘Made Of Stars’.
After a long hiatus, following the successful release of his well-received debut single “Dance Go”, the music maestro unleashes Made Of Stars as a follow-up to keep his unique steak going.
Chris Jela is a leader of the all-stars music group called “Loveworld Anointed next Generation“ also known as ‘LANG’ which was his biggest inspiration to releasing this newest masterpiece.
Also gotten song inspired by Isaiah 42:6, the LANG leader has brought a new revolution to the gospel music scene, and the music industry at large, which has come to stay. Join this affirmation train today as we proclaim and light up the world with the saving power of God's message
Made Of Stars was produced by the amazing XCEL. Mixed and Mastered at Buzz Angel Music studio, Lagos Nigeria.
DOWNLOAD
Connect With Chris Jela:
Twitter | Instagram | Facebook | KingsChat | AudioMack: @IamChrisjela
YouTube: Youtube.com/channel/UCmPq9o-4ao9tFqh5sWK7jSg
Soundcloud | ReverbNation: @Chrisjela