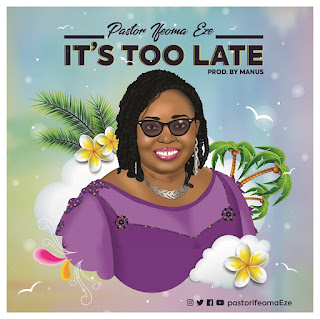 Pastor Ifeoma Eze shares a new single ' It's Too Late'. The single is an answer, a song of praise and a declaration of the unshakeable faith she and all believers should have while serving God in both good and moments of despair!
It is a song received in a place of deep meditation and intercession for all who cry while they serve God, telling of God's unending and unchanging faithfulness.
It is a story of how God has proved Himself faithful time and time again despite challenges.
With its rhythmic beats and strong lyrics, its practically impossible not to dance to its beautiful melody produced by ace music producer Manus.
Sharing on the inspiration behind the song, Pastor Ifeoma said, while going through a difficult time with three loved ones including her Dad in the Mortuary, Pastor Ifeoma Eze had God's existence questioned by the devil.  The devil asked her if God exists, how come she was passing through such pain despite her uncommon and outstanding dedication to God and His Service.
DOWNLOAD AUDIO
LYRICS - IT'S TOO LATE
Verse 1:
It is too late for anyone to tell me that
My God doesn't exist....
He's proved Himself so real
So many times again
No matter how I feel
Chorus:
Oh oh oh
He's God all by Himself
Oh oh oh
What He can't do doesn't exist
Oh oh oh
He's faithful by Himself
There's no doubt
He does exist
Verse 2
Too faithful to Fail
Making me Prevail
Despite My Weak Frail
When things are good
He exists
When things are bad
He exists
When things are tough
He still exists
Hook:
My God still exists
My God still exists
My God still exists
It's too late to not believe
It's too late to not believe
It's too late to not believe