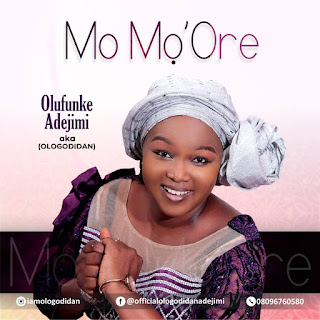 The new release, which is in audio and video expresses a few of the unlimited goodness of God to mankind. Citing instances of man's attempts which fail in some cases and turns out to be God's way of favour or rescue from a more deadly result.

Olufunke Adejimi, also known by many as Ologo Didan is a graduate of Kaduna Polytechnic, who started her musical career in 2007 and released her debut album in 2015, titled THE LORD IS MY PORTION. Her recent collaboration project with Juju-gospel maestro, Mega 99 which was titled 'Ejika' showcases her depth of music versatility.

Mo mo'ore is produced at AFOT JTK STUDIO by Oluwatobi Adeboye (Beloved), and the video is directed and edited by Xbase.

Get in on Boomplay