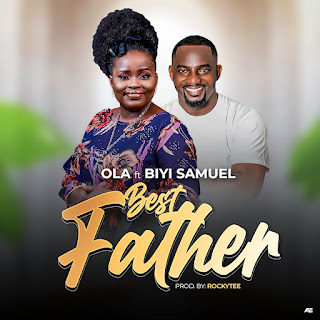 In Christianity, God is known as God the Father, God our Father, and God the Father of Jesus. It is through these truths of a relationship with our creator that God is seen as a father over all creation and personally to believers through grace. Scripture says God’s ways are “perfect” (Psalm 18:30), that He is a “faithful God who does no wrong,” and is “upright and just“ (Deuteronomy 32:4). That makes Him the perfect Father you never had. If you didn’t have a father who was approachable, loving, and had your very best in mind, God – as your Heavenly Father – is waiting to more than makeup for what you never had. take a look at what Scripture says about God the Father:

"One God and Father of all, who is over all and through all and in all." Ephesians 4:6 "BEST FATHER" by your Favorite OLA ft BIYI SAMUEL.

In the year 2016, She released her fourth album titled EVOLUTION which was nominated under the category of the Album of the Year 2017 Mega Awards with 3 other nominations in different categories.

Off her next album title "BEST OF BOTH WORLD" comes this song titled BEST FATHER featuring Biyi Samuel.