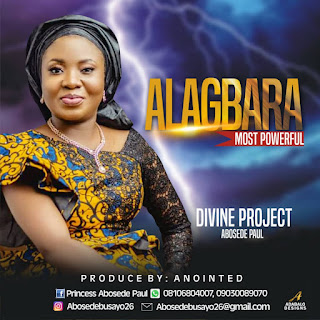 Nigeria-based music diva, worshiper, and prolific songwriter; Abosede Paul also known as DIVINE PROJECT releases her long awaiting single titled “ALAGBARA” (Most Powerful) Produced by Anointed.
DOWNLOAD
ABOUT THE SONG
ALAGBARA was composed when she was just 14 years old and it is one of her Praise prayer believing songs which was composed in the place of prayer at C.A.M.C
The song Alagbara has been a song of inspiration to her and those who have listened to it and she knows you also will be blessed.
BIOGRAPHY
Abosede Paul also known as Divine Project was born on the 4th of June in the 1980s. She hails from Fiditi, Oyo State.
She is a songwriter, music minister, and worshiper, a member of RCCG Revelation Tower, Kaduna province 4HQs.
She started her music career when she was just 12 years old and became a music leader at the age of fifteen (15) at Christ Apostolic Miracle Center Fiditi, Oyo State, and later left Out to Kaduna where she attended Restoration Bible Church and still continues ministering in Songs.
She is happily married and blessed with kids.
Follow Glory Abosede Paul (Divine Project) on Facebook, Instagram and subscribe to her YouTube channel for new music and ministry updates.