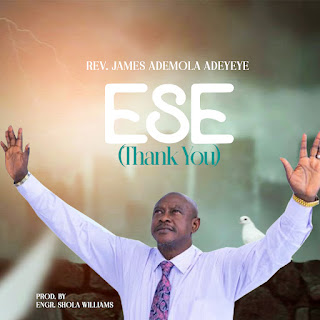 Nigerian gospel singer, songwriter, and music minister, Pastor James Ademola Adeyeye releases his latest single titled "Ese"  produced by Shola Williams.
The soul-lifting midtempo is an indigenous song of worship fused with contemporary elements. The song beautiful delivered in the Yoruba dialect is a song of gratitude to God, a sound of thanksgiving to a God who has done all things well
DOWNLOAD
Pastor James Ademola Adeyeye is a soul-lifting, inspirational singer who has emerged in the gospel music industry with a series of inspirational songs to inspire and bless lives. He is good, talented, and blessed with a sweet and sonorous tenor vocal.
Pastor James was born into a Baptist family in Lagos Yaba and an indigene of Iree town in Osun State. He is a product of Yaba College of Technology where he studied Accounting, he further pursue his Master of Arts in Organisational Management (2006) and another Master of Arts in Christian Education (2012), He also has a Diploma in Pastoral Studies (2001) and Clinical Pastoral Education (CPE) Trained Chaplain 2008.
Pastor James started singing at the tender age of 13 years as a chorister at First Baptist Church Yaba, he was motivated into music by his Late Uncle Mr Abiodun Ajayi who has a strong baritone voice that attracts him to join the choir department which he discovered his musical talent, he took it up and nurtured the talents as he grew.
He joined the African Baptist Church in Fortworth  Texas and has served as an Assistant Music Director in the youth church and also served as a Worship Leader in the African Evangelical Baptist Church in Arlington Texas.
He works in America as a Grant Management Specialist and he is currently the founding Pastor of The Revival Worship Center at Kennedale Texas.
He is happily married and blessed with 3 young men. In his word his aim is to encourage both the young and old generation, bringing the young generation back to the church through good music and making the world see the light of Christ and release their heart to appreciate Christian Music.
Pastor James has produced many albums of contemporary songs and gospel hits Music, here are some of his albums:
- All That Bothers Me (A Reggae beat song produced in the year 2008)
- Anointed With Gladness (A worship song produced in the year  2015)
- Olorun Ayo (Translates as God of Joy is A danceable alujo music with so much melody produced in the year 2015)
- I'm Favored (An Inspirational Music composed under the lead of the holy spirit and produced in the year 2017)
His upcoming Singles are titled:
- Ese (Translated as Thank You)
-  I Give My Praise (A soul lifting worship song
- Olorun Ayo Remix
Song produced by the multiple-winning Audio Engineer/producer Engr Shola Williams.
SOCIAL HANDLES
Facebook: @ James Adeyeye
Instagram: @ James Adeyeye
Twitter: @  James A. Adeyeye @PJADE365
Email:  aapastorjames365@yahoo.com